UConn Hockey In The Month Of December

Sophomore Defenseman David Drake (right) Had A Career Month, Being Tied For The Team Lead In Points In December With Three (0g, 3a).

The month of December was a complete contrast to the month of November where UConn Hockey is concerned.  After a winless month of November that saw the Huskies plummet to 11th in the Hockey East standings and post an 0-7 mark overall, 0-4 league mark during this grueling month, part of an eight game losing streak.  But in December, the Huskies were walking in a Winter Wonderland on the ice, going undefeated in December to close the first half of the season and go into the Christmas and Finals Break on a high note.  Although it looked like the Huskies would do even worse in December since they were riding their long losing streak into a month where all games were against ranked teams, the Huskies found a spark with a win in the first game of the month, snapping their losing streak, and putting some life back into them.  December not only rewarded Husky fans for sticking with their team through the losing streak, but also showed the Huskies’ season wasn’t “lost” as some claimed and that their team wasn’t horrible.  It proved that the Huskies just needed to win to get back on track, show the team that they really have, and start the climb back into the thick of the Hockey East standings; and they got that win, and then some.

The Huskies’ first game of December was to be a home game against the No. 5 UMass Lowell Riverhawks at the XL Center on a Saturday afternoon, the first game of a home-and-home conference series.  The first period belonged to the Huskies, as they came out with some firepower, out-shooting the Riverhawks 11-6, playing with resolve towards ending their eight-game losing streak.  The Huskies’ solid start was rewarded with their scoring the game’s first goal.  At 11:27 of the first period, Tage Thompson wristed a wrist shot through traffic and by UMass Lowell netminder Kevin Boyle on the power-play to make it 1-0.  The Huskies continued to play hard and they held the one-goal lead heading into the locker room.  The lead didn’t last long once the second period commenced, as just 1:51 into the period, C.J. Smith buried a rebound to knot the game up.  The Huskies seemed to rebound well though as the rest of the period was even, even though the Riverhawks led the shot category 11-8 for the period, until UMass Lowell scored to take the lead at 18:08 of the period when A.J. White buried a pass at the right post to make it 2-1.  If the Riverhawks were looking to enjoy the lead heading into the third period, they had an unpleasant surprise.  The Huskies flew down the ice off the center ice faceoff following the go-ahead goal, and Corey Ronan took a nice pass and buried his shot through traffic to tie the game up, 2-2, just 21 seconds after the Huskies had fallen behind.  The Huskies weren’t done yet, and still had another goal left in their sticks as they completed the wild scoring frenzy to pull ahead 3-2 with 19 seconds to play in the period.  Spencer Naas attempted to sneak one in on the wrap-around, but Kevin Boyle denied him, only for Naas to poke home his own rebound to put the Huskies up by a goal heading into the third period.  The Riverhawks came out with a vengeance in the third, out-shooting the Huskies 13-5 and tying the game up once more just 47 seconds in.  C.J. Smith threw a shot on goal that Rob Nichols easily made the save to, but the rebound was put home off the stick of Ryan Collins.  The game had now shifted in favor of UMass Lowell, but a power-play chance for UConn at 11:58 gave the Huskies a chance to take the lead back, which they dramatically took advantage of.  Tage Thompson recieved a cross-ice feed from Joseph Masonius and buried a beautiful shot into the top right corner to make it 4-3 UConn, with his second goal of the game, to cue a roar from the 4811 in attendance at the XL Center.  The Riverhawks pulled Kevin Boyle with 3:18 to go, and although they peppered the Huskies with shots, UConn was up to the task, with Rob Nichols making four saves and the Husky defense, led by senior captain Patrick Kirtland (two blocked shots) blocked five and held on for the exhilarating 4-3 victory that gave everybody at the XL Center something to cheer about knowing that the eight game losing streak was now a thing of the past.  Rob Nichols made 27 saves, and Tage Thompson had two power-play goals, to hand the Riverhawks their first Hockey East conference loss of the year.  The Huskies produced this feat for the second year in a row, as last year the Huskies also handed UMass Lowell their first conference loss, with a 2-0 win at the XL Center in front of 6855 fans.  Thompson is now tied for the national lead for power-play goals with six, as all of his goals have been on the man-advantage.  The Huskies were out-shot for the game 30-24; the Huskies were 2-for-2 on the power-play while UMass Lowell went 0-for-1.

After the unbelievable and unexpected win in the first game of the weekend home-and-home series, the Huskies looked for their first weekend sweep as a member of Hockey East and the season series with the Riverhawks, as they traveled to UMass Lowell to play at the dreaded Tsongas Center, where the Riverhawks are especially tough.  The Huskies had their first sweep of a season series last year against the UMass Minutemen, with 4-3 and 4-0 victories.  The game was to be televised nationally on multiple channels including NESN.  In game two of the battle between the teams with the top two attendance numbers in Hockey East, the Riverhawks came out flying, out-shooting the Huskies 14-4 in the first period, but neither team scored in the hence scoreless first period.  UMass Lowell had a Grade-A chance when on a UConn power-play, Evan Campbell picked the puck off at the blue-line and came streaking down on a shorthanded breakaway  but Rob Nichols made a terrific glove save to keep the game knotted up 0-0.  The second period was completely even, with both teams registering 10 shots, and the Huskies garnering four power-play opportunities but they failed to find the back of the net on any of these chances.  The Riverhawks received three power-plays and unlike the Huskies, took advantage of the power-play, to break the scoreless tie.  Joseph Masonius was called for a penalty with 52 seconds remaining in the period and the Riverhawks made him pay.  Dylan Zink fired a shot on net from the right circle that Nichols denied but Zink picked up his own rebound and sent a pass across the crease to Adam Chapie who banged it into the open side with five seconds left in the period to put UMass Lowell up 1-0 heading into the third period.  The Huskies were roaring in the third, out-shooting the Riverhawks 19-7, but still couldn’t find the back of net.  But at the 8:34 mark of the period, the Huskies finally scored to tie the game.  David Drake fired a shot on goal from the right circle that resulted in a scrum in front of the net and Assistant Captain Shawn Pauly found the puck and shoveled it in to tie the game up, 1-1.  Just seconds later, the Riverhawks got a breakaway which Derek Pratt stopped effectively but did so by dragging the opposing player down, to give the Riverhawks a penalty shot and a chance to retake the lead.  Rob Nichols stood tall in goal, being aggressive and stopping the attempt at the right post to preserve the tie.  The Huskies then silenced the Tsongas Center with the shocking go-ahead goal.  At 11:13, UMass Lowell was assessed a tripping penalty as the Huskies earned their sixth man-advantage of the game and this time they converted.  During a scrum in front of the net, Tage Thompson took a little pass from Max Letunov and roofed the puck through everyone in front to put the Huskies up 2-1.  The Huskies would hold on for the 2-1 victory in front a shocked Tsongas Center.  The Huskies out-shot the Riverhawks for the game 33-31, with Nichols making 30 saves.  Tage Thompson provided the game-winner for the second game in a row, with his national-best seventh power-play goal on the season.  The weekend sweep over the No. 5 UMass Lowell Riverhawks was the Huskies’ first as a Hockey East member and first-ever over a nationally ranked team.  The Huskies also impressively dealt the Riverhawks their first two conference losses of the year, including their first home loss of the year.  Obviously, this was one of the most impressive weekends for the Huskies in the history of the program.

The Huskies’ next game was their final game before the Christmas break, as they squared off with the No. 19 Merrimack Warriors at home in the XL Center.  The Huskies and Warriors skated to a 3-3 tie to send the Huskies into the break on a high note with a three game unbeaten streak.  The month of December, while short, provided the Huskies the turnaround they needed, breaking their eight-game losing streak and starting to get back on track in the Hockey East standings, righting the ship before too much damage was done, preventing the season from becoming lost.  The Huskies finished the first half 5-10-1 overall and 3-7-1 in Hockey East play, sitting in 10th with only seven points but only one point behind Vermont, UMass, and New Hampshire and just two behind Merrimack.  While November was tough, December put the Huskies back in the game (no pun intended) and in a good spot heading into the second half. 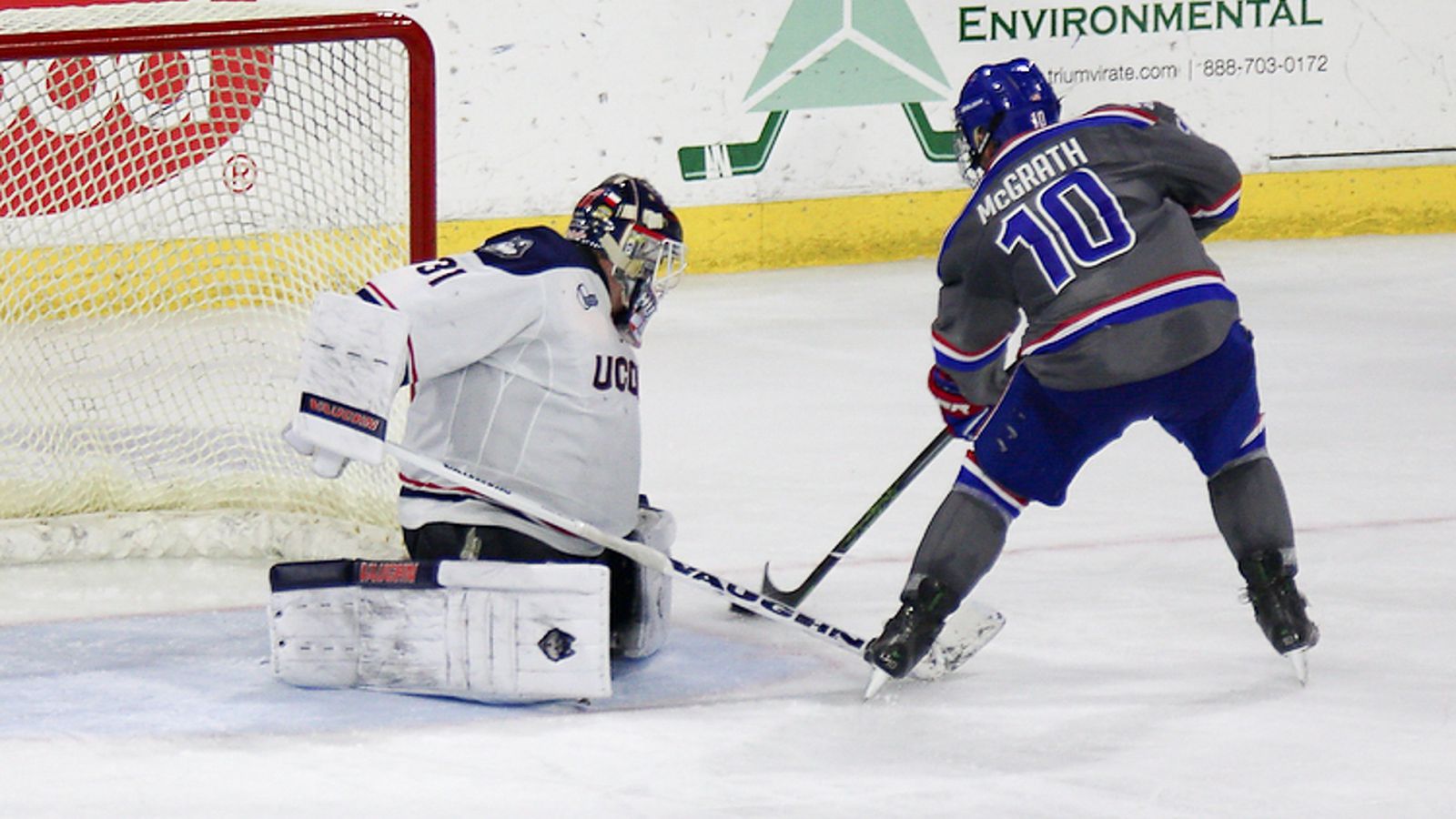 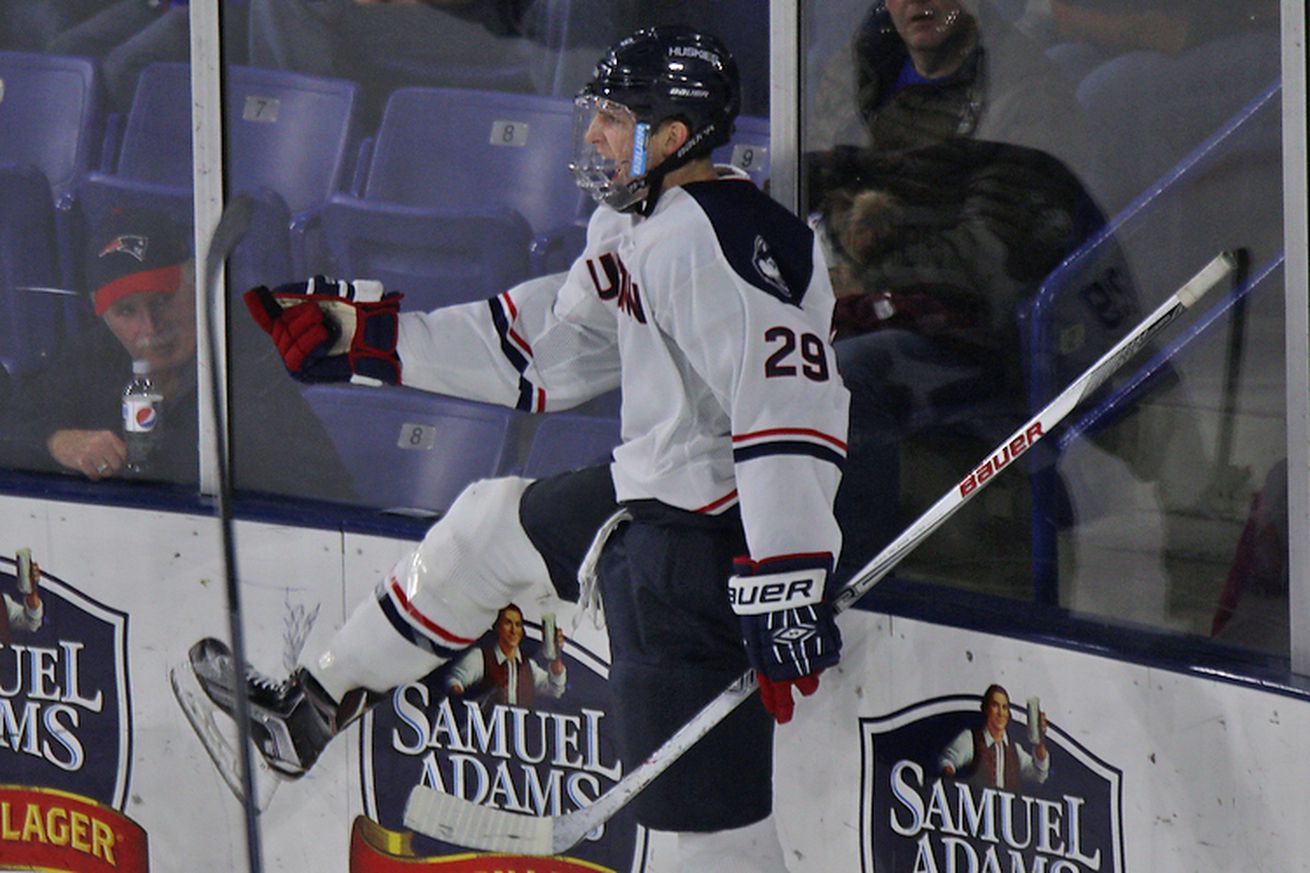